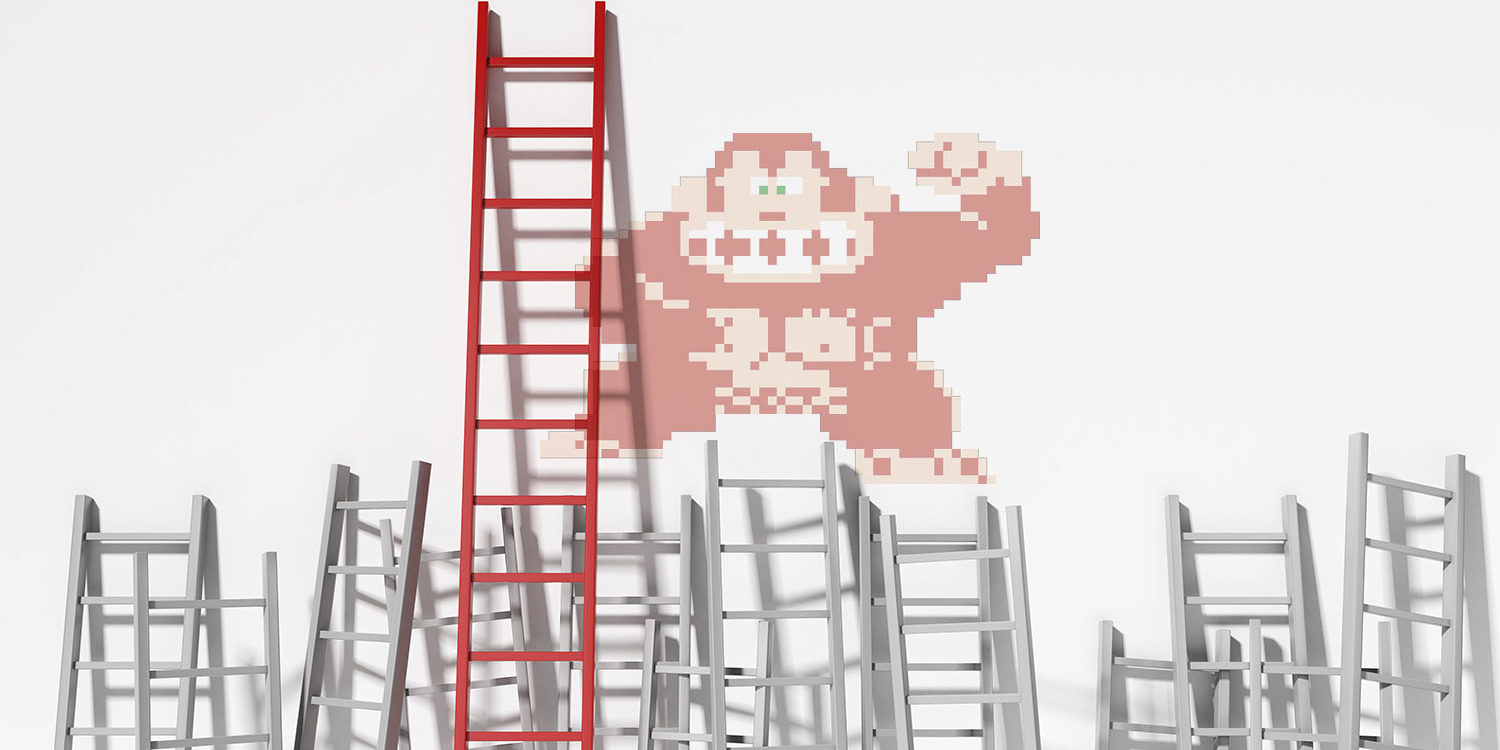 The Myth of the Career Ladder, the Realities of Donkey Kong

We too casually throw around these terms: career; career ladders; career paths and tracks. All are rather modern concepts — recent creations, far from etched in stone.

For most of human history, a day’s occupation was simply survival. Work to eat and not get eaten. As human communities began to form, individuals within them began to take on roles suited to their abilities. Hunter. Gatherer. Nurturer.

Time marched on. These roles became familial, earning coveted slots on ships headed to the New World. Some of you may carry the legacy of these family occupations in your own names: Farmer or Cooper. Smith, Wright, or Miller.

Slowly, “living” became “a living.” The rise of industry brought us the union movement and the birth of the “career ladder” as we now recognize it: the mystical image of defined path. A set of rules. Apprenticeship. Advancement. 30 years, a pension and a gold watch.

The ladder lives on in dwindling trades and highly structured or regulated white-collar industries like medicine, law and finance where the steps to residency or partnership are clearly defined.

But for most sectors of the economy, career development is more fluid. Industrial and manufacturing jobs are receding. Employers are less focused on long-term retention, and employees are more likely to move jobs every few years.

The typical model no longer evokes a straight ladder up. It looks more like the old video game, Donkey Kong, with uneven floors, ladders of varying heights hidden in random corners, and yes, the occasional ape throwing obstacles in your path.

The truth is: there is no single career ladder. The world doesn’t adapt to you unless you make it. You need to take ownership of your path.

This reality can get lost when so many aspects of culture are designed around easy shortcuts. Amazon opens to precisely the product you want. Highways have express lanes — miles of concrete corridors with no exits. In college, it’s the set major-minor curriculum, designed to categorize students into simplified buckets and a one-size-fits-all checklist of education toward their aspired field.

What they don’t tell you is that most of the knowledge you need for your career you won’t have by graduation day. Industries are moving fast, and in many cases, increasingly out of sync with classroom curricula. In high school, I studied for the AP Computer Science exams. I scored two 5’s and was excited to place ahead once I reached college, only to learn the language of the exam — PASCAL — was no longer taught. I began to study desktop application development in C++ only to graduate into a marketplace seeking web development experience.

What paid off was not the classes that taught one language or another but those that focused on logic and problem solving. Once you know how to shape and develop a thought, you can pull a book of the shelf to find the right syntax.

In this regard, where careers are increasingly shaped more by continued life-long learning than by the college degree, my 8th-grade advisor David Griswold’s “How to Study” is the most important textbook you’ll read. No individual course of learning is as important as learning how to learn, and shaping it to your passions. To quote Mark Twain: “choose not to let schooling get in the way of your education.”

I get it. The notion of a career ladder is seductive. Reassuring, in fact. Every 8.3 seconds — a completely made-up statistic but one I suspect is near true (I have the best numbers) — someone in the world defends a purchase with the words: “It was on sale!”

Perhaps it was a steal. But nonetheless, buying a product you don’t need simply because of the “50% Off!” tag serves someone else’s goals more than your own. The same is true for taking a job or a promotion because it is the next rung on some imagined ladder.

Resist rigidity. Don’t live by someone else’s plan. Begin by focusing on your passions first and testing your goals and decisions against that vision.

I recognized the love of politics, news, and technology early, while I was still a child; but my path breaks the rules of traditional career planning. It zigged and zagged through multiple trails: TV news, politics, back to TV, then to Twitter and whatever comes ahead.

In retrospect, these choices were perfectly aligned to the equilibrium I’ve since enjoyed — even though the concept of leading news and politics at a tech company couldn’t have been imagined at most forks in the road. The plan worked because it was more focused on passion than destination.

You must set the right goals for where you are in each stage of flight. A pilot taxiing to the runway at JFK isn’t focused on whether she’s taking a taxi or the BART train to get into the city upon landing in San Francisco. What good would it do? Get in the air. Head west. The details come together as the distant horizon comes into focus.

You build in the ability to seize new opportunities by creating flexibility, guided broadly by where you’re going, not simply accepting someone’s map that claims the “best” way to get there. Those highway express lanes are great until there’s an accident or someone gets hungry or needs a bathroom break.

Build your own exits. Gain the tools to be nimble, and set the stage for adaptation. Explore concentrations and electives offered at your college. Take intro courses outside your core discipline. When you graduate into a workplace of peers with nearly-identical skills, being the outlier creates the richest opportunities. Whatever your field, learn to code. Even just a little bit gives you power over the digital tools increasingly critical to modern jobs.

Magicians call this creating “multiple outs.” It goes like this: I say pick a card, any card. You pick the ace of spades — just as I wanted you to when I fanned the deck and “forced” your attention. A few shuffles, and I say, “look under your chair.” Abracadabra, there’s the ace of spades.

The trick depends on you taking the card I hoped you would — just like the conventional “career ladder” depends on the system around you following the rules of what life is expected to create for you. The world isn’t usually that obedient.

You surprised me. You took the two of hearts. It’s ok because I now ignore your chair and tell you to look under the centerpiece instead. Abracadabra, there it is. Just like the king of clubs is behind the painting and 49 other cards are hidden around the room. By focusing on the ultimate goal of amazing with “magic,” and not getting hung up on the details of everyone else following my plan, the trick is still a success.

Then there’s the ape. There’s always the ape. The boss who doesn’t like you. The high school or college rejections. The job you don’t get or the one you lose. Take your punches and find the opportunities within them.

When most people seek advice from highly successful ones, they usually ask for the “secrets” to their success. I’d suggest they’re asking the wrong question. The most successful people you’ll ever meet are usually also the biggest failures. Their wisdom is found in those defeats. Someone who has never failed was lazy in their goal-setting.

Politics is full of examples. In 2000, a congressional candidate in the first district of Illinois was trounced two-to-one by a strong incumbent. Defeated, a friend persuaded him to attend the Democratic convention that summer anyway. The friend wound up picking up the tab as the nearly-bankrupt candidate’s credit card was declined, first at the car rental then at the hotel.

In January, that failed candidate completed his second term as President of the United States, an office he likely would not have held had the trajectory of his career been marred by early success in that primary. In his place, a new president took office: a business leader who at one point, after several corporate bankruptcies, is said to have told his daughter a homeless man’s net worth was higher than his own.

Engage mentors and study your idols. Learn from where they failed as much as where they achieved. Pick out what inspires you and fits with your passions, but recognize those elements that don’t align. Define your own path rather than a carbon-copy of someone else’s.

In 2014, I gave a commencement speech in which I spoke about the balance of gravity and momentum. Spacecraft that get too close to another planet without enough momentum of their own get sucked in by gravity and crash. Those with momentum in courses set for the well-beyond get near enough to these planets to feed off the gravitational pull. They use it as a slingshot, propelling them to their distant target with even greater speed.

Find those sources of gravity in your life, and their strength will help propel you to your own distant goals.

Take ownership of your career. Level-set your goals, putting your passions first. Take your punches and learn from them. Feed off the wisdom of mentors and idols. Most importantly, set your own course. (And don’t forget to learn to code.)